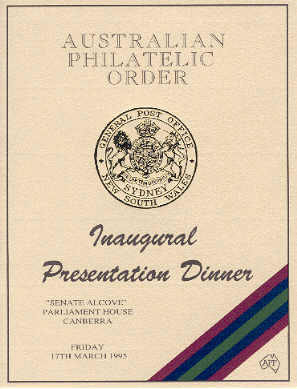 hich aim to recognise and honour philatelists and others who have made a significant contribution to the development and promotion of philately in Australia.  The APF’s Award system comprises two main components – the Australian Philatelic Order Awards(including the Research Award)  and the APF Services to Philately Award (at the National Level) or SPAN.

The History of the Australian Philatelic Order

The Awards are now an established highlight of the Australian philatelic calendar with a formal presentation ceremony held in conjunction with the Annual General Meeting of the APF.  Nominees are considered on the basis of their services to organized philately, which includes distinguished philatelic study and research. This includes judging, and promotion of philatelic and public dissemination including teaching.

The medal design and the collarette ribbons have special significance to Australian philately.  The design of the medal is that of the World’s first stamp, the New South Wales embossed Lettersheet of 1838.  It is the Coat of Arms of William IV, engraved by Mr W Wilson and was struck in blind embossing on a sheet of writing paper approximately 330m x 210mm, to be folded and sealed to envelope size.  They were initially sold at 1/3 per dozen and intended to be used for the 1d local Sydney District, postal rate.  They were not popular, only small quantities were used and even today, unused examples are not common.  It is generally conceded that the introduction of this embossed Lettersheet established New South Wales, as the first Country in the world to accept prepayment of the postage by means of an impressed stamp.  The Ribbons each in thee color, also have philatelic significance.  The major Award, Fellow, is in the three colors red, blue and green representing the 1d, 2d and 3d “Sydney Views”, the first issue of postage stamps in the Colony of New South Wales 1850, while the Ribbon for the lesser Award, member, is in orange, lilac and blue representing the 1d, 2d and 3d “Half Lengths”, the first stamps issued in the Colony of Victoria, also 1850.

In addition, an APF Research Award was introduced in 1997 to ensure recognition of those who have made significant contributions in the field of research.

For Research, the medal design is symbolic of Australian philatelic research, while the Collarette Ribbon color is of philatelic significance in that it represents, in limited form, the complex shades and colors of Australia’s most written about and extensively researched stamp – the 1914 KGV One Penny Red.